belatrovians will know that we at No 9 Bankside are hard working and industrious and that we subsequently reward ourselves at the end of the week with a deliciously cold Dry Martini lovingly prepared by the Alcomeister hours in advance so as to reap the most from this sublime Emperor of Cocktails. We have also more than hinted at the excellent qualities of the Negroni in a previous blog. But today we will sing the praises of an altogether different drink and toast a man whose standing should be far better appreciated than perhaps it is. How does all this relate to art, design and craft?

Ross on Wye is a charming town on the northern edge of the Forest of Dean and perhaps the birthplace of British tourism when in 1745 the rector Dr John Egerton started taking friends on boat trips down the valley to appreciate the river scenery, its castles and abbeys, its precipices and its altogether picturesque environment. By the 1850s the Wye Tour established the area as a tourist attraction. The town is known for its independent shops, narrow streets and market square with its market hall. Opposite the church, the Prospect is a public garden offering a view of the famous horseshoe bend in the River Wye, as well as views of the distant Black Mountains in Wales.

The Man of Ross

The Prospect was created by one John Kyrle. He is without doubt the town’s most famous son (and we say this in the full knowledge that two of the founding members of Mott the Hoople were from Ross). He devoted his life to philanthropic works, introducing a public water supply to the town and laying out the Prospect Gardens. He also reconstructed and added pinnacles to the unsafe 14th century spire of the Church of St. Mary and gave it a magnificent tenor bell. He sponsored the causeway to the nearby Witton Bridge and set up funds for needy local children to attend school. Kyrle lived modestly as a bachelor on an income, it is said, of £500 per year. Apart from Kyrle’s charitable works and deeds, he also settled disputes, supported the schools, tended the sick and helped the poor. His public-mindedness also extended to beautifying the town and its surrounding landscape.

His life and good works were celebrated by the poet Alexander Pope in his Moral Essays written in 1732 and called him the ‘Man of Ross’, the name by which he has been known ever since:

“…Who taught that heav’n directed Spire to rise?

The Man of Ross, each lisping babe replies.”

Now, Pope, though an interesting poet, was also a hugely influential landscape gardener and as the perfect representative of Augustan poetry he uses the same principles when it comes to landscape gardening. The Augustan style takes its inspiration from ancient Rome and Greece, emphasizing elegance, harmony, balance, formal strictness and simplicity. We are not just talking Geometry here but surely you’ll agree that it is one easy step from Pope’s harmony to the perfect balance of Mondrian‘s paintings (and to his New York connections) and thus to belatrova’s Manhattan range of ceramics and tables.

And to celebrate these 18th Century geniuses why not raise a cocktail to them? Your 18th Century taste buds were likelier to go for the sweet rather than the dry, so, in keeping with the general theme, we thought the Manhattan hit the spot:

Pour the ingredients into a mixing glass with ice cubes.

Strain into a chilled cocktail glass.

Garnish with the cherry.

Ladies and gentlemen, raise your glasses to the Man of Ross, and consider this: the pursuit of all that is excellent in design and harmony continues in Ross on Wye with the launch of a new gallery in the town centre. The Studio Gallery, open from the 16th August, is exhibiting ceramics, painting and high quality craft, and would love to see you. So would belatrova, whose work is on show there. 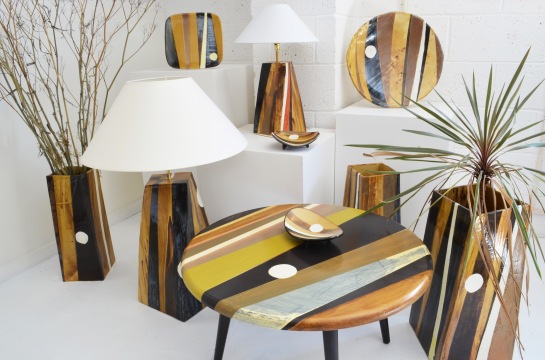 “Hope springs eternal in a young man’s breast: Man never is, but always to be blest.” 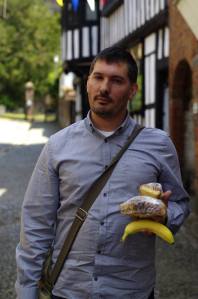 There were over ninety events in all, including Japanese and Italian poetry, digital poetry, turntabling with Jah Wobble, bike rides, a Cerys Matthews sing-a-long, underwater sound poetry – belatrova tried to imbibe as much as possible and came out of it satiated and inspired. And there was the bookArt 13 exhibition at the Shell House Gallery with five artists, Jeanette McCulloch being one, giving us a rich visual experience with the text.

We did reject the idea of a Ledbury Pottery Festival to run concurrently with the poetry (and someone also came up with the idea of a yearly Ledbury Poultry Festival), and instead took up Jacob Polley’s suggestion to read an essay by Barry Lopez on anagama ceramic firing (“Effleurage: The Stroke of Fire” from his collection “About this Life”). Anagama kilns are wood-burning tube chambers usually built on a gentle slope to promote draft and reach great temperatures, producing ware that is “licked and scorched by wood flame, glazed and encrusted with wood ash”.

His descriptions of the process, the patience needed, the constant feeding of the fire night and day, the unpredictability of each firing, explains the attraction it holds for potters drawn to social cooperation, physical work and subtle firings. It is the antithesis of the rigid commercial kiln processes. Anyway, it is beautifully written and is now being circulated amongst the local potters.

The belatrova kilns are electric, so control over the heating is simple compared with the mixture of instinct, experience and know-how required for the anagama firings, but there is nevertheless a similar feeling of apprehension and excitement just before you open the lid to see what the gods of fire have done with all your hard work. We usually lift the lids when the temperature goes down to 80° or lower, the kilns having spent two days slowly climbing down from their peak, in our case, of 1280°.

more than just a hairline crack

A gentle stoicism permeates the workshop on these occasions as the ware is slowly revealed and brought out into the light, sometimes with a tiny hairline crack, sometimes with an obvious split, sometimes in small pieces, but most often the ceramic is good to the eye and it is placed on its shelf ready for any wet sandpapering.

Here’s a three legged bowl that came out unscathed, on a belatrova table: