Coasters, specially ceramic coasters, have become desirable designer acquisitions in recent months, partly in response to the growth in interest for cocktails – something in which we at belatrova have had a hand (you need only go back to earlier blogs to see our recipe for the perfect Dry Martini, and others). Of course, you may not have been aware of all this, which is why belatrova, always in the vanguard of taste and style, thinks it is important to bring this to the notice of all belatrovians and help them solve the annual dilemma faced by so many: “where can I find that special Christmas gift that is both uniquely attractive yet practical?”

Why are they called “coasters“? According to our research, coasters were originally called sliders in the 1700s and were used as a stand to prevent moisture damage to a tabletop and for sliding the bottle of wine along a tabletop from guest to guest after supper when the table cloth was removed and the servants dismissed, leaving the diners (usually men) to fend for themselves. Cue drunk and unseemly male behaviour. These sliders later became known as coasters in allusion to their circulation around the edge of the table. Early ones were made of silver, china or glass, and some were fitted with wheels or with baize-covered wood bases to reduce friction on bare tables.

Some coasters are collectible items. Tegestology is a term coined from Latin (teges, a small covering or mat) defined as the practice of collecting beer mats or coasters. Consider, then, becoming a tegestologist by acquiring belatrova’s ceramic coasters and thus simultaneously easing your Christmas shopping experience.

At £5 a coaster belatrova is offering sets of six for the price of five, plus a delivery charge of £5.95, making it a very affordable £30.95. There are three choices: Brushstroke Blues, Valencia or the Selection (a combination of both).

Or pay us a visit on any day – just ring us beforehand to make sure we are not out delivering.

Or visit the Studio Gallery in Ross-on-Wye

This is how we make our coasters:

In order to give you some idea of size we have placed a coaster next to a familiar eveyday object:

We know we are way ahead of ourselves but were thinking of recommending a new cocktail for you to drink on Christmas morning, something called Marmalade Fizz invented by the London Cocktail Club, but in the end decided to be traditional and went for that mellow but elegant drink: Black Velvet. It is guaranteed to get you in the mood for the day

Method: fill a Champagne flute halfway with the Guiness then top it off very gently with

Champagne so that it lingers atop the Guiness as a separate layer. Try pouring the Champagne over the back of a spoon to prevent it from plunging straight into the stout. This ephemeral separation is fleeting but satisfying. The drink is smooth and effervescent, just like belatrova.

And finally we would like to announce the winner of the “guess the NSPCC panto auction price of the belatrova table” competition (see previous blog):

L.H of Malvern will be getting a pair of ceramic trivets.

Winter is drawing in and the days are getting shorter, Christmas is around the corner, and belatrova is already thinking about 2014 and what it will bring. New colours, newer shapes and sizes of tables and bowls, and who knows what else, though one element will always be a constant at No9, and that is the oxide that produces the colour we most associate with intelligence and trust, serenity, logic, reflection and calm.

Which colour do we think of when winter is upon us? Which is the one that will calm the mind and bring serenity? It is the colour of clear communication, the colour of the mind, essentially soothing, the one we most commonly associate with harmony, faithfulness, and confidence.

It is the world’s favourite colour. But it was not always so: in Europe the colour blue grew in prestige and popularity only because of the veneration of the Virgin Mary and a change in the colours used to depict her clothing. Earlier, her robes had usually been painted in blacks and greys but after the 12th century they began to be painted a rich blue, usually made with a new pigment imported from Asia; ultramarine. So that is how blue became associated with holiness and virtue.

And long before belatrova came into existence, Chinese artisans, in about the 9th century, abandoned the traditional recipes they had been using and began to use cobalt blue, made with cobalt salts of alumina, to manufacture fine blue and white porcelain.

These ceramics were shaped, dried, the paint applied with a brush, covered with a clear glaze, then fired at a high temperature. Centuries later, this was exported in large quantities to Europe where it inspired a whole style of art, called Chinoiserie, though European artisans only succeeded in emulating their Chinese counterparts in the 18th century after a missionary brought the secret back from China. 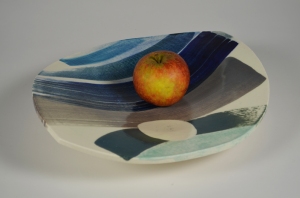 belatrova scooped bowl made with cobalt and other oxides

For all the associations those in Europe attach to blue, in other cultures it can have other associations. In Mexico, Iran and Korea it is the colour of mourning, in the Middle East it is associated with protection, and in the East it is generally linked to immortality, life and femininity.

And just think how artists have used it down the centuries. Look at Vincent Van Gogh’s Starry Night Over the Rhone (1888) and see how the colour is used to create a mood. That cobalt blue sky and sea, and the touches of yellow/orange (cobalt’s opposite), are what create everything depicted – an immersion in blue.

Starry night over the Rhone by Vincent Van G

So all this is a roundabout way of saying to all of you: “see you next year, enjoy the winter, have a happy Christmas.” We will raise our Dry Martinis to you and dream up new things for your delectation – belatrova knows that even arctic reindeers’ eyes change colour over the course of the seasons (from amber to blue), so we may surprise you in 2014, though cobalt blue will always be there in some guise or another.